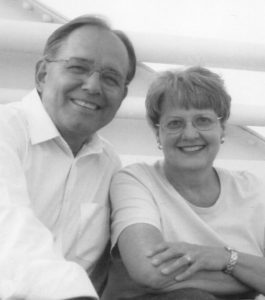 Roger and Jeanie oversee the activities of The Antioch Group.  They met in Phoenix when they were 14, and were married in 1965.  That same year they moved to Tulsa, OK, thirty days before the opening of the new Oral Roberts University.  They attended ORU from 1965 – 1967.

They began ministering together in 1969 as directors of The Way Out, a live-in drug rehabilitation center located near downtown Tulsa.  From 1983 to 2005 they pastored Fayetteville Christian Fellowship in Fayetteville, AR.  In 2005 they organized The Antioch Group, and they presently minister through it’s various activities.

The Staub’s were both raised in the Pentecostal traditions of the Assemblies of God.  Their ministry to believers from many traditional churches during the 1960’s and 70’s charismatic movement greatly broadened their understanding of the work of the Holy Spirit and the dimensions of the Kingdom.

Roger is ordained through World Ministry Fellowship, and was a 30 year member of its Central Ordination Council.  Jeanie is a Licensed Professional Counselor (LPC), with a degree in Psychology from the University of Arkansas and a Masters degree in Counseling from John Brown University. She maintains a small private practice; Renewed Hope Counseling.

They minister the Word and Spirit of God by preaching, teaching, exhortation, writing, and counseling.  The Holy Spirit, the life of faith, personal freedom, and the Kingdom of God are frequent themes in their ministry.  The Antioch Letters is their personal communication tool, usually published monthly.

Pastor Staub has written You Are the Plan; God’s Account of Your Remarkable Story and Life on a Dirt Road, a collection of mini-parables and encouraging stories, many based on their life in the Arkansas countryside.  Roger and Jeanie co-authored Making Our Stand; Keeping Love Strong in a Ministry Marriage, and Roger has also written Feed My Lambs, a guide for Christian parents and a children’s tale, The Matchbook; Pedro’s unusual journey.

The Staub’s live on 10 acres just outside West Fork, Arkansas with their dog Mollie.